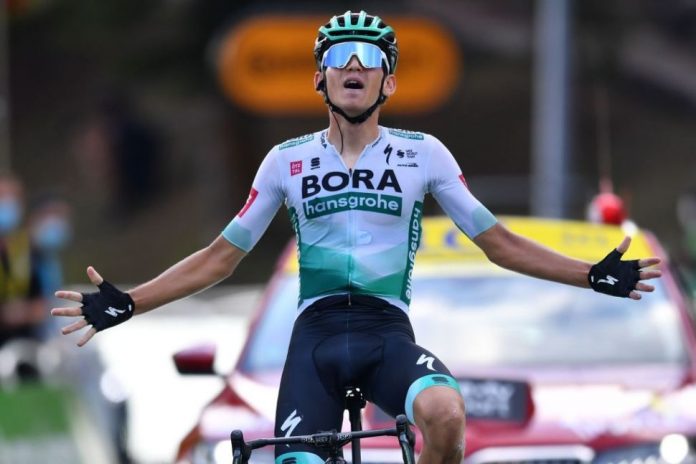 Lennard Kamna won the roller-coaster stage 16 at the Tour featuring five categorized climbs after pulling clear of a group of breakaway riders as the race entered the Alps on Tuesday.

Kamna was beaten by four seconds for the stage win by Daniel Martinez on stage 13.

”It was a fight from the beginning on and I knew I had to make it to the finish alone,” said Kamna, who also won a stage last month at the Criterium du Dauphine.

There was no significant change in the overall standings ahead of Wednesday’s mammoth summit finish in the high mountains as yellow jersey holder Primoz Roglic kept his 40-second lead over second-place Tadej Pogacar intact.

The Slovenian pair enjoyed a quiet day in the pack of main contenders and crossed the finish line 16 minutes, 48 seconds behind the stage winner, who is not a threat in the overall standings. Rigoberto Uran remained in third place overall, 1 minute 34 seconds off the pace.

Pogacar tested Roglic’s legs on the final ascent but could not gain time on his rival.

”It was a good warmup for tomorrow, the queen stage of the race,” Pogacar said. ”There will be gaps and a mix-up on the GC. We see everyone is exhausted.”

After losing more than seven minutes in the Jura mountains Sunday, defending champion Egan Bernal went through another day of hardship at the back of the race, getting dropped by the main contenders in the 11.1-kilometer steep climb where Kamna built his success.