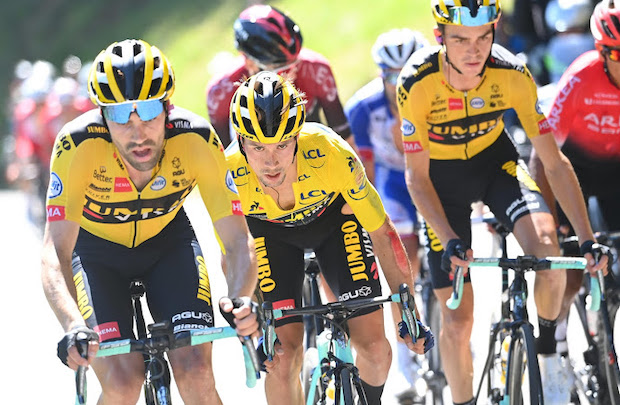 Team Jumbo-Visma has started the new cycling season with a training camp near Alicante. Not only the pros, but also the U23 and the new women’s team around Marianne Vos have gathered in a hotel on the Costa Blanca, but will live and train separately in strict team bubbles in the coming weeks.

In the coming days, the team will put the final touches on the composition of the programs. The most important question is of course with whom Jumbo-Visma will appear at the start of the Tour de France on 26 June in Brest. While Roglic’s unexpectedly lost the yellow jersey to Tadej Pogacar on the final uphill time trial to La Planche des Belles Filles last year, winning the Tour de France in 2021 is once again the most important goal.

The technical staff has already set around the table in recent weeks and their plan is to try again with the three leaders Roglic, Dumoulin and Kruijswijk to start the French adventure. The three riders have also expressed their preference internally to start in the Tour.

While Jumbo-Visma mainly prepared last year to compete with Ineos Grenadiers, they will now focus on Tadej Pogacar’s weaknesses. The technical staff has already discussed with the main riders which tactics they can use to put Pogacar on fire.

The NOS documentary “Code Yellow” made it clear that the riders internally questioned the tactics in the last Tour. After stage two, Dumoulin emphasized that the team was driving around with an aura that they were going to “just win” this Tour.

And before the ride to the Col de la Loze, Roglic indicated that they gave Pogacar a “free ride” every day until the last kilometer. Although the team controlled the Tour very dominantly throughout the entire race, it actually couldn’t exploit the strength of the collective tactically anywhere. The yellow-black predominance never managed to force a situation, causing loner Pogacar to be in trouble. That will have to change in 2021.

The Tour squad for next summer will broadly resemble last year’s. George Bennett is in principle back on the Giro d’Italia and his place is taken by Steven Kruijswijk. Amund Grøndahl Jansen has left for BikeExchange and will normally be replaced by Mike Teunissen. For the rest there will be no changes. Although Van Aert will be given a freer role, so that he can also set his sights on the green jersey.

Although there are eight stages on paper for the sprinters, the Tour de France comes too early for Dylan Groenewegen. The Dutchman has been suspended until May 7 due to the incident in the Tour of Poland. The team management wants to bring him back calmly by riding many “smaller” races so that he can regain pleasure and confidence. The Vuelta a España has not yet set a final line, but for the time being the team has entered the name Groenewegen in pencil on the list of participants of the BinckBank Tour.

Another surprise is that Dumoulin prefers the Flemish classics instead of the Amstel Gold Race and Ardennes classics and will ride in Tour of Flanders.