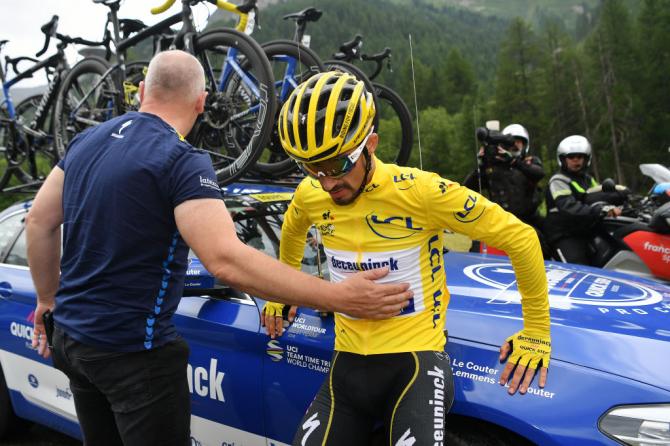 Julian Alaphilippe is set to defend his title at Strade Bianche, where last season he captured the victory at his very debut in the race and delivered France’s first ever victory at the race, following a powerful surge on the last uphill part, in the historic center of Siena.

“Winning last year was an amazing feeling, one of my best memories of the season. I came at the start with a great shape, was really focused and had a very strong team at all times around me until the race came to life inside the final hour. I love the parcours and the atmosphere of Strade Bianche and it will be interesting to restart the season there, especially as the race comes after a different preparation than the one I had last year”, says Alaphilippe.

The coronavirus pandemic meant that the Velo d’Or winner had to change his original schedule, leading to a return of the Tuscan one-day race on his calendar, together with another mainstream Italian race – Milano-Sanremo – the site of his maiden Monument win, which he captured after emerging from an elite ten-rider group on the famed Via Roma, in what was a nail-biting finish.

“Taking my first Monument on the Via Roma was incredible! I owe that victory to the Wolfpack, they were absolutely incredible on that day. Having great legs and being very confident also helped me claim what I still consider the biggest victory of my career. I’m happy to be back at the start this year and pin on number one on my jersey.”

The Critérium du Dauphiné (12-16 August) and the National Championships (23 August) will be Alaphilippe’s next appointments, ahead of a third consecutive participation at the Tour de France, the race whose main protagonist he was last year, when he took home a brace of stage wins and carried the yellow jersey for 14 days.

“The Dauphiné is the best preparation for the Tour de France. It will be a special edition with many hard stages, but that doesn’t scare me and I would love to win again a stage, like last year. As for the National Championships, I think it’s every rider’s dream to win the tricolour. I will give it my all, even though the parcours doesn’t really suit me like the old one in Plumelec”, added the 28-year-old Frenchman. “Anyway, I will take it one step at a time. At the moment, the preparation is going well, I’m happy to be here in Val di Fassa with the guys, I talked with the team about my goals and I’m really eager to restart the season to see how I feel and what I can do.”