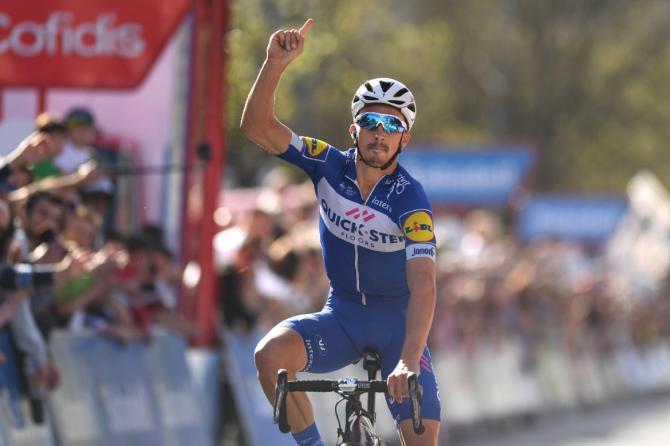 Julian Alaphilippe (Quick-Step Floors) took the opening stage of the Vuelta al Pais Vasco after he was part of a late escape of two men.

The Frenchman crossed the finish line ahead of Primoz Roglic (LottoNL-Jumbo) to became the first leader of the race as Pello Bilbao (Astana) won the sprint for third in a group consisting of a dozen riders.

Alaphilippe was the only cyclist able to stick with Roglic during the steep climbs on the day’s final challenge, with sections of the slope rising above a 20% gradient.

With bonuses factored in, Alaphilippe holds a four-second lead over former ski jumper Roglic, with Pello Bilbao of Spain half a minute behind in third going into Tuesday’s 153km run from Zarautz to Bermeo.

“I’m really happy. After a good week of training, I wanted to test my condition here,” said Alaphilippe, who is already looking ahead to this month’s Ardennes Classics.

“To win here is good for my motivation before the classics in Belgium.”

For Vincenzo Nibali, 24th in Sunday’s Tour of Flanders, the transition from cobbled roads to steep climbs proved a tough one as the Italian dropped back on the final ascent to finish a minute back of Alaphilippe.