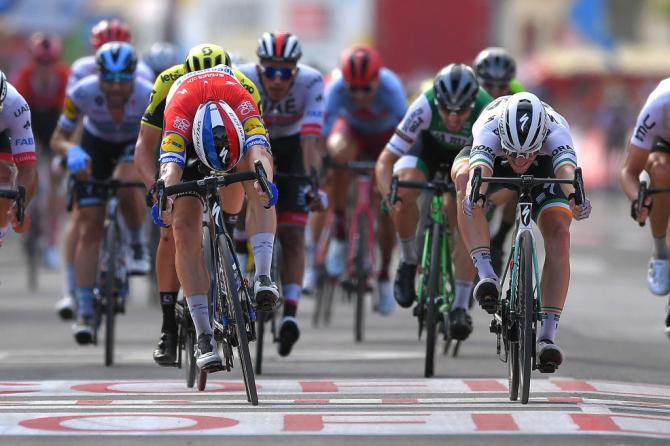 With his eyes closed, Fabio Jakobsen beat Sam Bennett in a photo finish to win the fourth stage of the Vuelta on Tuesday, while Nicolas Roche kept the overall lead.

Jakobsen fended off a strong charge by Bennett in the final meters of the 175-kilometer ride from Cullera to El Puig on Spain’s eastern coast.

”I couldn’t see because I closed my eyes, Sam was so close,” said Jakobsen. ”I went for the line and threw my bike. When I saw people from the team cheering I knew I had won. This is a big one.”

It was the first Grand Tour stage win for the Dutch rider from team Deceuninck-Quick-Step.

”To win in a Grand Tour is one of the things you dream of as a sprinter,” Jakobsen said. ”In my head I thought I could do it, but you never know for sure. To win a stage of La Vuelta wearing the colors of your country is amazing.”

”This one hurts a lot,” Bennett said. ”It was really hard to position myself in the final kilometers. On the last roundabout I lost many positions because I chose the wrong side. I really forced this one to happen but it just didn’t go as I hoped for.”

Roche finished safely in the peloton. He will carry a two-second lead over Quintana entering Wednesday’s fifth stage, which will take riders 170 kilometers (105 miles) from the city of L’Eliana to a finish by an astronomical observatory in Arcos de las Salinas.