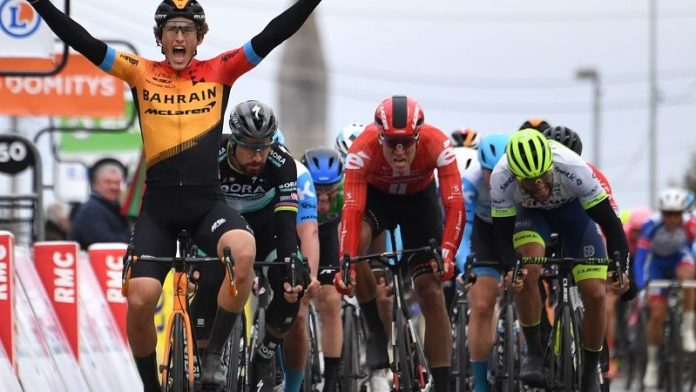 Ivan Garcia Cortina (Bahrain McLaren) took advantage of a late crash to emerge as surprise winner in a bunch sprint on stage three of the Paris-Nice.

Maximilian Schachmann (Bora-hansgrohe), the winner of the opening stage on Sunday, retained the overall lead after coming home 13th. He swore to keep the yellow jersey as long as possible.

“I showed in the past I could ride good time trials,” he said in reference to stage four on Wednesday. “I want to defend this beautiful jersey and I’m going give it my best in the time trial and then in the showdown in the hilly, mountain stages.”

The late fall Tuesday caused a ripple of panic as Garcia Cortina and Peter Sagan reacted quickest, speeding across the line first and second after a long 212.5km ride in wind and rain.

“I was surprised to beat Peter Sagan,” Garcia Cortina said. “I managed to find the right place to go and just went full gas,” he explained.

“There was a lot of tension and nervousness in the last kilometres,” said Sagan. “Most of the sprinters found themselves without many team-mates in the final straight, it became a man-to-man battle. Unfortunately, I found myself in the lead early on and I couldn’t keep the pace all the way to the line.”

The early action on Tuesday was dominated by Belgian rider Tom Devriendt of Circus Wanty Gobert, who embarked on a 180km solo break. He led by over seven minutes but was reeled in with 30km to go.

Wednesday’s fourth stage is a 15.1km individual time trial around the town of Saint-Amand-Montrond, birthplace of French ace Julian Alaphilippe. 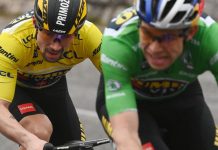 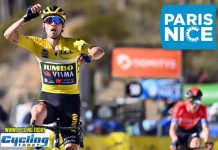