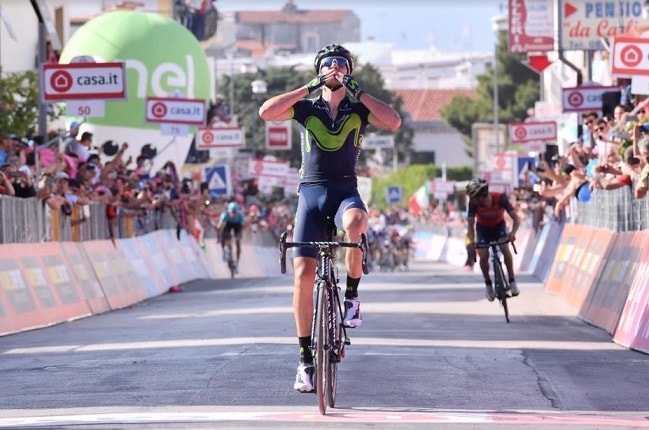 Gorka Izagirre (Movistar) has won a thrilling stage at the Giro d’Italia as the race exploded into life in Puglia.

As the peloton closed in on a lead group of four riders, Izagirre avoided the fall of Valerio Conti, who skidded out on a slippery hairpin inside the final kilometre,  and rode clear of fellow escapees Luis Leon Sanchez and Giovanni Visconti.

“It wasn’t on our day’s plan to enter the break, but we saw a chance into that long descent, we also had to keep riders from dangerous teams at reach, and so we decided to give it a try and carry on later on once we made it it”, said Izagirre. “We saw the opportunity to go for the stage and I’m so glad we could finish it off. When Conti crashed just in front of me I was a bit hesitant, because there was still around one kilometer remaining. However, I looked back, saw that there was a split in our group, and I chose to go on full steam until the very end. It was really a long ascent with that action, but I’m just incredibly happy that I got this!”

Izagirre powers his way to a first ever @giroditalia stage win for @Movistar_Team ?#Giro100 pic.twitter.com/6VrvtXq1B2