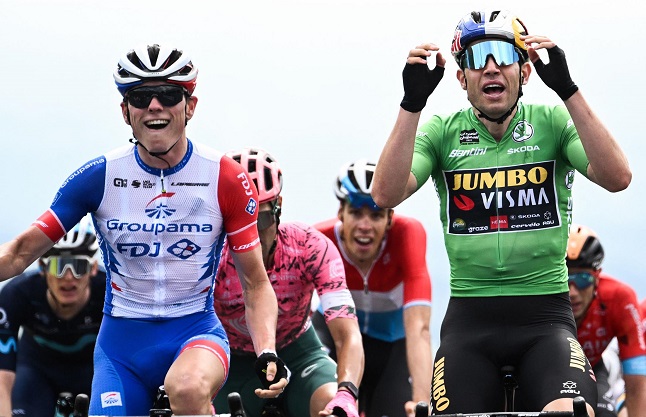 David Gaudu snatched victory ahead of Wout van Aert who took the race lead after the third stage of the Criterium du Dauphine on Tuesday at the ski resort of Chastreix-Sancy.

Gaudu caught Van Aert in a sprint finish but the Jumbo–Visma rider claimed the leader’s yellow jersey after the mid-mountain stage concluding at an altitude of 1,396 metres.

“I was a bit far behind for the final stretch, I thought I couldn’t do it,” said Gaudu. “Then Kevin Geniets arrived and I followed his wheel. I felt I had strength, I saw Van Aert was going well but I told myself I was gonna get him. And I did it. I’m moved because I had been waiting for a victory like that since the start of the year. I’ve left the doubts behind me, after all the struggles at the beginning of the year. The legs felt good on the climb, that’s good for what’s coming next, especially this week-end.”

Overnight race leader Alexis Vuillermoz was left behind with 2.5km to go after the 169km ride from Saint-Paulien.

Gaudu, 11th in the Tour de France last year, claimed his ninth victory and second of the season after a stage in the Volta ao Algarve in Portugal.