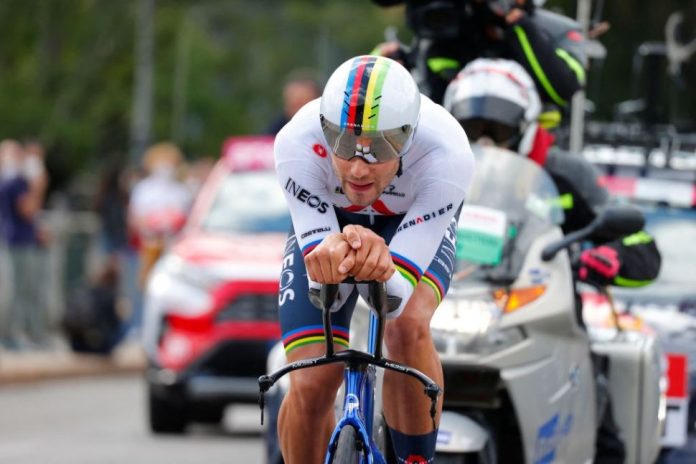 Filippo Ganna claimed the first Maglia Rosa leader’s jersey of the 2021 Giro d’Italia on home soil, winning the opening time trial, an 8.6-km ride along the Po river on Saturday.

You can rewatch STAGE 1 of 2021 Giro d’Italia HERE

“It’s been a lot of time that I wasn’t in the hot seat but I’m here and so I’m really happy,” Ganna said after the stage. “Now we have to think think to tomorrow and to recovery to start what will be a really hard Giro”.

“I started with a small radio but I didn’t hear anything, so I told myself to go full gas and listen to the people along the road. If they cheered for me, then I knew I was going fast. That’s how I got this amazing victory.

“After Romandie my morale was not too high, but now its back and I’m really happy.”

Remco Evenepoel, who was making his comeback to competitive cycling more than eight months after serious injuries in a freak crash at the Giro di Lombardia, secured an encouraging top-10 finish, 18 seconds off the pace.

The 21-year-old, who won all four of the stage races he started last season, is making his grand tour debut, gunning for the general classification.

Among the other overall contenders, Aleksandr Vlasov clocked 9:12, faring better than 2019 Tour de France champion Egan Bernal (9:26), Simon Yates (9:25) and double Giro champion and local favourite Vincenzo Nibali (9:28), who is back to racing after recovering from a wrist injury that required surgery.

Last year’s runner-up Jai Hindley of Australia was a bit further down in the rankings with a time of 9:33.

Sunday’s second stage is a 176-km ride from Stupinigi to Novara.