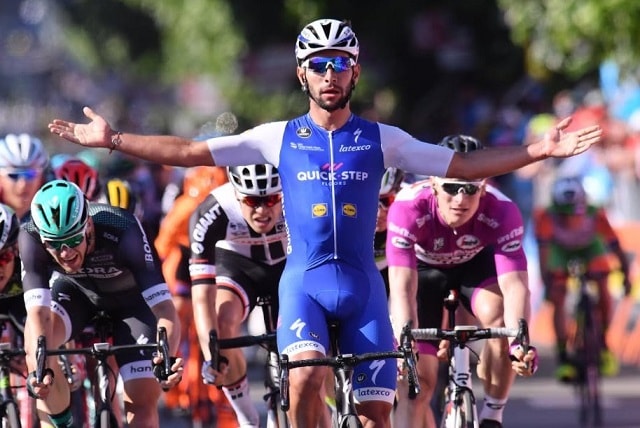 Fernando Gaviria claimed a bunch sprint finish in Messina to claim his second stage win of this year’s Giro d’Italia, as all the main GC contenders finished safely in the peloton.

Gaviria, who won his first ever Grand Tour stage on Sunday in Sardinia, edged out Italy’s Jakub Mareczko at the end of the undulating 159-kilometer (99-mile) route from Pedara to Messina, the hometown of 2013 and 2016 Giro winner, Vincenzo Nibali.

Mareczko came back from a long way out, storming down the left side of the road to pip Irish rider Sam Bennett, who finished third.

“I’m happy with these two victories. My legs responded as I wanted,” the 22-year-old Gaviria said. “This win isn’t only mine, it belongs to all the people who support me, to my family who are here.”

There was an incredible moment when Luka Pibernik thought he had won the stage and raised his hands in celebration as he crossed the line, forgetting there was another 6.2km lap.

Jungels maintained his six-second advantage over Geraint Thomas. Adam Yates remained four seconds further back, with most of the overall favorites.

What a sprint!!@FndoGaviria steps on the gas to make it two stage wins at the #Giro100 pic.twitter.com/T0Y68fYkr9