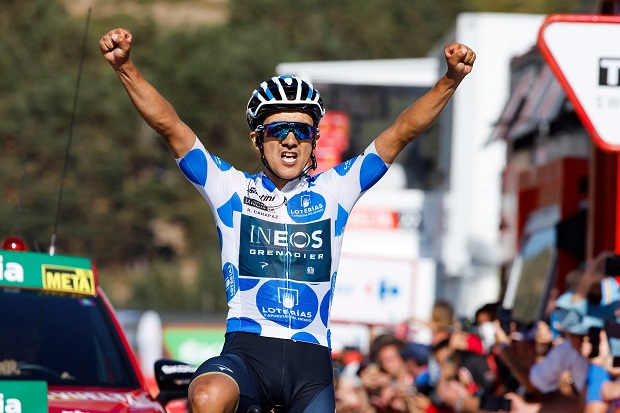 Remco Evenepoel looked poised to claim his maiden Vuelta e Espana title after successfully defending his overall lead on Saturday’s penultimate stage, which was won by Richard Carapaz with a brilliant solo effort.

Evenepoel held an advantage in excess of two minutes over Enric Mas heading into stage 20 and faced little trouble in seeing out the day after his Spanish rival failed to close the gap despite finishing fifth.

“I don’t know what’s going through my head and my body right now. It’s amazing,” said Evenepoel, who was overcome with emotion after crossing the line in sixth.

“All the critics and the bad comments I received after last year, I think I answered with my pedals. I’ve been working so hard to come here in the best shape possible. To now win this Vuelta is just amazing.”

The 181km ride from Moralzarzal to Puerto de Navacerrada, the last mountain stage in this year’s race, witnessed a battle between Carapaz and Sergio Higuita on the final climb but it was the Ecuadorian who accelerated with 7km to go.

Carapaz also sealed victory in the mountain classification with his third stage win this year.

“I was targeting this day, I knew it was very important. We knew it was a super hard stage because there were so many things at play, especially in the general classification,” said the Ineos Grenadiers rider.

“I rode my way, being smart, making my moves when I had to. Then I enjoyed a lot of support from the breakaway riders. The truth is I’m very moved… to fight for the King of Mountains was one of my goals.”

The three-week race concludes on Sunday with a flat 96.7km journey from Las Rozas to Madrid.