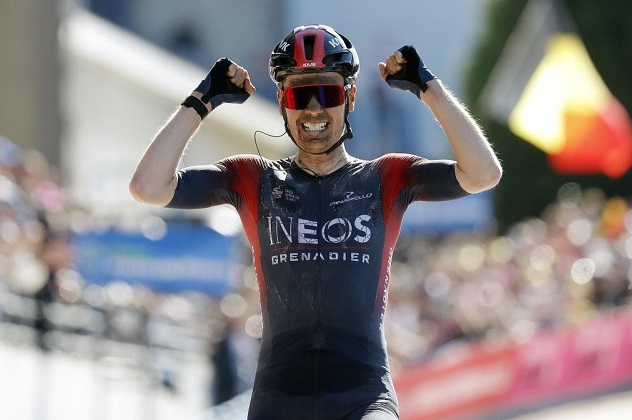 Dylan van Baarle timed his attack on the final cobblestone sections perfectly to win the Paris-Roubaix for the first time on Sunday.

The 29-year-old Dutchman won after 257 kilometers of grueling racing. His average speed of 45.8 km/h was a record.

Wout van Aert edged a tight sprint to finish second ahead of Stefan Kung in third — both 1 minute, 47 seconds behind Van Baarle.

Although he won the Dwars door Vlaanderen last year, this is by far Van Baarle’s biggest victory and he milked the applause upon entering the Roubaix Velodrome alone.

“It’s unbelievable. I couldn’t believe it when I went on the velodrome, you know. I looked at the other side to see if there were some other guys. When the team car came up next to me with Servais [Knaven]. then I really started believing in it. It’s been crazy,” Van Baarle said.

“I mean, it’s a Monument, so of course, I wanted to win a Monument. To be second in Flanders and then to win Roubaix, I’m lost for words.”

The sunny conditions were far removed from last year’s mud-splattered and rain-soaked race held in October. Mathieu Van der Poel was third then, but the Belgian rider was ninth this time.

Several riders crashed or picked up punctures on the cobbles, which will feature again on this year’s Tour de France from July 1-24.

With 50 kilometers left, the front three Laurent Pichon, Matej Mohoric and Tom Devriendt led by 50 seconds but the gap was closing quickly.

Pichon was dropped but Van Baarle and Yves Lampaert joined Mohoric and Devriendt. Heading into the final cobblestone section, Van Baarle surged ahead on the tough Carrefour de l’Arbre section as the crowd roared.

Lampaert crashed heavily after catching the arm of a spectator on the side of the cobbles, but got back up to finish 10th.