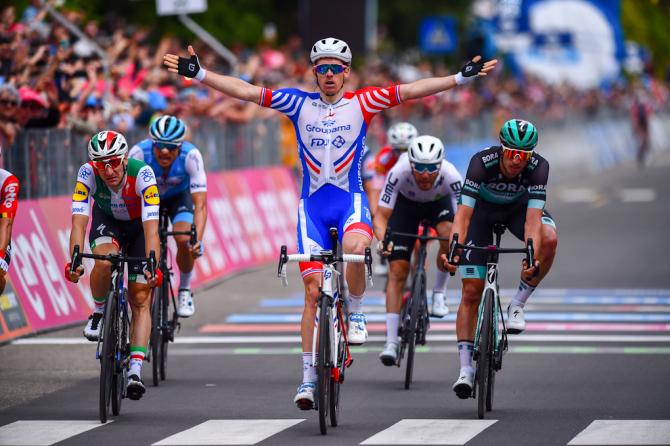 Arnaud Demare sprinted to victory after a crash affected the end of the 10th stage of the Giro d’Italia on Tuesday, while Valerio Conti kept the overall lead.

The Groupama-FDJ rider edged out Elia Viviani and Rudiger Selig in a bunch sprint at the end of the entirely flat 145-kilometer (90-mile) route from Ravenna to Modena.

”We came to the Giro for this. I really wanted a stage win and I got it,” Demare said. ”I avoided the crash because we, as a team, were very well positioned. I’m super happy.”

A crash inside the final kilometer ended Pascal Ackermann’s chances of claiming a third stage win at this year’s Giro. The German cyclist finished the stage with his shorts and jersey in tatters.

Ackermann appeared to touch wheels with the rider in front of him, causing him to go down and taking out a number of other cyclists.

The most seriously injured was Matteo Moschetti, who briefly lost consciousness. His Trek-Segafredo teammates and other cyclists frantically waved over medics and Moschetti attempted to stand but swiftly sat down again. The 22-year-old was taken to a hospital.

As the crash happened inside the final three kilometers there were no time gaps given. Conti remained 1 minute, 50 seconds ahead of Primoz Roglic and 2:21 ahead of Nans Peters.

”It wasn’t a hard day but, as everyone saw, danger is always around the corner,” Conti said. ”Luckily I managed to avoid all the crashes. It went well, another day in the pink jersey is a source of pride.”

Wednesday’s 11th stage is also entirely flat along the 221-kilometer route from Carpi to Novi Ligure.