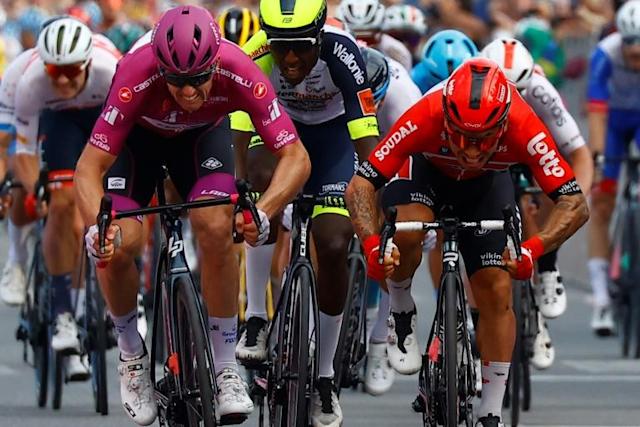 Arnaud Demare claimed his second win in two days with a thrilling sprint finish for stage six of the Giro d’Italia on Thursday.

Demare pipped Caleb Ewan in a photo finish on the line after the 192km ride from Palmi to Scalea in the southern Calabria region.

Demare claimed his seventh stage win, becoming the most successful French rider in the race around Italy ahead of legends Jacques Anquetil and Bernard Hinault, who have six each.

“It was very tight. I had the feeling that I had won but it was hot so I waited for the photo-finish,” said Demare.

“A win is sometimes decided by very little,” continued Demare. “It’s in my favour today. The team has done a tremendous job. I only had 100 metres to overhaul Cavendish.

“I threw my bike on the line and it made the difference. Many people underestimate me but it’s my 86th victory today, my seventh at the Giro d’Italia. It counts. It’s wonderful.”

“It was all under the control of the sprinters’ teams,” said the Spaniard. “It will be very different tomorrow but we’re ready with the team to defend the Maglia Rosa.”

Friday’s seventh stage is a gruelling 196km ride between Diamante and Potenza including four climbs between the Calabrian coast inland to Basilicata with a summit finish.