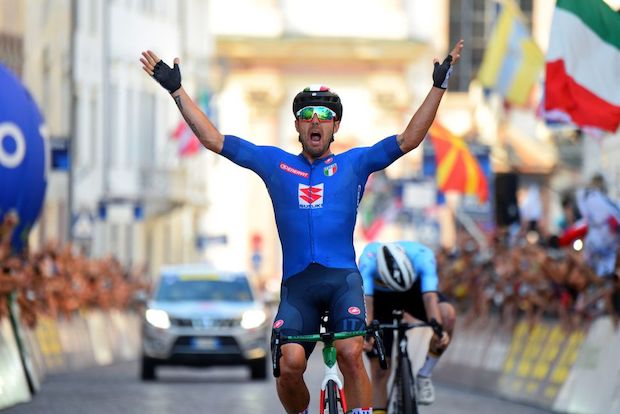 Italy has won the men’s European road race title again, this time with Sonny Colbrelli in Trento, in front of the Italian public.

Later in the race Remco Evenepoel then stepped up the pace in the final stages of the race pulling further away from the leading group until only Sonny Colbrelli was on his wheel. The two-man sprint was inevitable and Colbrelli crossed the line well ahead of the Belgian cheered on by the huge crowds.

The Italian national team won its fourth continental title in a row following the wins by Matteo Trentin (2018), Elia Viviani (2019) and Giacomo Nizzolo (2020).

“It’s amazing. A fantastic victory”, said Colbrelli. “I didn’t have a good feeling at the beginning of the race. I had also got a lot of pressure as this race was a huge opportunity for me. But the Italian team worked perfectly, and Trentin, in the final, supported me excellently. Then I managed to follow Evenepoel on the last climb, although I was suffering. I’m so happy also because I took this win in Italy and as an Italian is something special.”