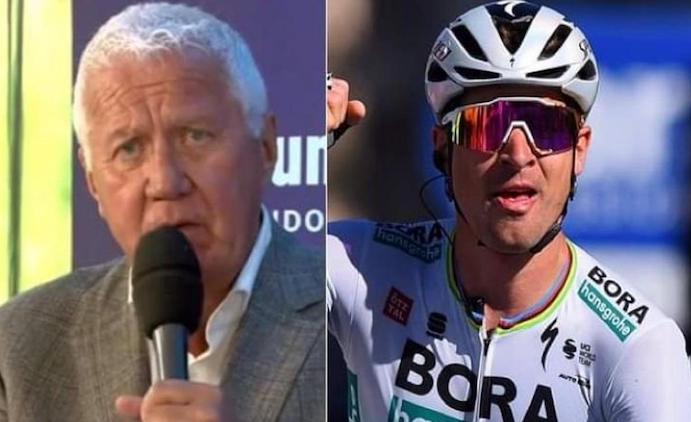 Peter Sagan has been frequently associated with Deceuninck-Quick-Step lately, but according to Patrick Lefevere the Bora-hansgrohe rider will not make the switch to his team.

“To tell the whole story: it all started with our contract extension with Specialized”, Lefevere opens his story. “They will join our project until 2027, which will make us one of the longest-running partnerships in the WorldTour. As part of the contract talks, our owner Zdenek Bakala has started talks with Mike Sinyard, Specialized’s CEO. That’s where the name Peter Sagan came up.”

“Specialized has had a personal sponsorship deal with him for years and Zdenek also thought it was a good idea that Peter would ride for our team. Everything fitted together well, but I immediately put on the brakes.”

This is mainly because Lefevere “doesn’t want a team on his team.” “That cannot be reconciled with the Wolfpack philosophy,” he says.

“Sagan’s agent is Giovanni Lombardi. He wanted to talk as soon as possible and we did. He assured me that the eleven entourage was not set in stone. For a number of people, solutions had already been found elsewhere, so that the package “Sagan plus eight” was on the table. Until recently I heard from Lombardi that a team was willing to take everyone on board.”

“I also read that it would be Direct Energie, but to be honest: I don’t know. In any case, Sagan’s preference goes out to that new team and that argues for his loyalty. He wants as many regular people around him as possible. Too bad, but unfortunately: our cooperation will be for a next life.”

“In the first instance I talk to the guys from the team who want to extend. This week with Florian Sénéchal and I previously sat together with Mattia Cattaneo and Fabio Jakobsen. A few talks are also planned in the Giro on Sunday.”

In addition, many applications from riders come in at the Lefevere formation. “Also from riders who left us earlier. They now urge to return ”.