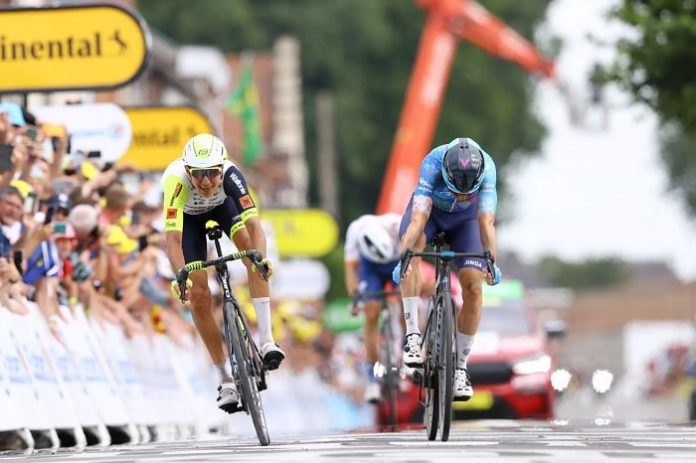 Tadej Pogacar passed his first Tour de France test with flying colours when he gained time over all his rivals on the cobbled roads in a vintage fifth stage on Wednesday.

Clarke prevailed in a lung-busting sprint finish to beat Taco van der Hoorn and Edvald Boasson Hagen, who were second and third, respectively.

“Both the stages I have won the Vuelta came to similar finishes, two, three-up sprints”, said Clarke. “You really just have to bide your time. Even when Powless attacked, you just have to sit back and pray that the other guys panic before you do. I just tried to leave Edvald a little bit of space that he would get the jump on me. He took the bait, then I really had to chase him hard.

Wout van Aert retained the overall lead at the end of a rough day for his Jumbo-Visma team, with Primoz Roglic, runner-up in 2020 and one of the pre-race favourites, losing more than two minutes to Pogacar after a crash.

Van Aert also hit the deck but ground through the whole stage and helped his team mates to chase down all day long.

Among the other favourites, last year’s runner-up Jonas Vingegaard finished 13 seconds behind Pogacar after a long chase following a mechanical. Geraint Thomas also limited the damage when he finished in Vingegaard’s group.

Ben O’Connor, a surprising fourth overall last year, failed to make his way back into the bunch and lost more than three minutes to Pogacar.

There was more heartbreak for the Bahrain Victorious team as their leader, Jack Haig, abandoned the race after a crash.

Overall, Van Aert leads Neilson Powless, fourth on the day, by 13 seconds, and Boasson Hagen by 14. Pogacar sits in fourth position, 19 seconds off the pace.