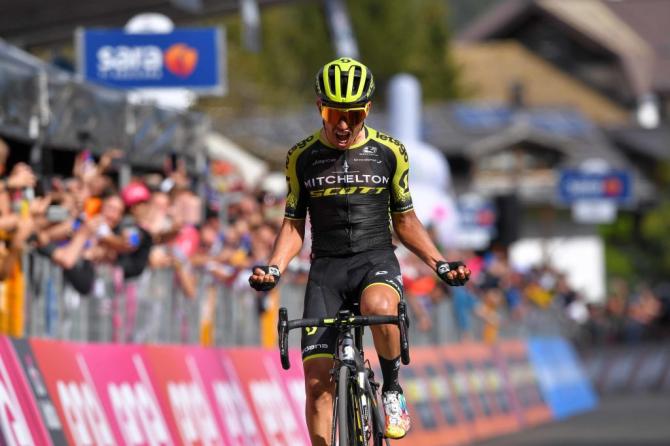 Richard Carapaz tightened his grip on the leader’s pink jersey as Esteban Chaves claimed victory in the 19th stage of the Giro d’Italia on Friday.

Chaves edged clear of a breakaway that battled up a final 13.6km climb with a 5.6 percent gradient.

The 29-year-old, who finished second in the Giro and third in the Vuelta in 2016, found himself riding solo with just under 3km to race to the line. Andrea Vendrame (Androni Giocattoli-Sidermec) twice overcame chain problems to finish second with Amaro Antunes (CCC) rounding out the podium.

“This is pure happiness,” beamed Chaves. “It takes a heavy weight off my back.

“It’s a relief to be a winner again. It shows I can do it. Because the last climb wasn’t very steep, I had to attack many many times. A big thank you to everyone who supported me when I had a hard time.”

Miguel Angel Lopez was the big winner of the GC guys as he finished more than 40sec ahead of his main rivals. With just two days of racing to come, the Colombian is now lying in sixth at 5min 33sec.

“I felt good all day, so I attacked,” said Lopez. “I am happy with the result but, certainly, the most important thing will be decided tomorrow.”

Carapaz resisted a late surge by Primoz Roglic, holding on to cross the mountain-top finish line in a peloton alongside the Slovenian, Vincenzo Nibali and Mikel Landa, the latter two staying in second and fourth positions overall respectively.

“I was expecting Miguel Angel Lopez to attack, but we dealt with it the best possible way with Mikel Landa,” Carapaz said.

“It’s another good day for us and we’re looking forward to tomorrow. We’re ready to defend the Maglia Rosa in a harder stage than today.”

On Saturday’s penultimate stage, the riders tackle a punishing 193km ride from Feltre to Croce d’Aune Monte Avena in the Dolomites that features five long climbs including 11km at 5.5 percent up Croce d’Aune and 6.9km at 7.3 percent up Monte Avena.