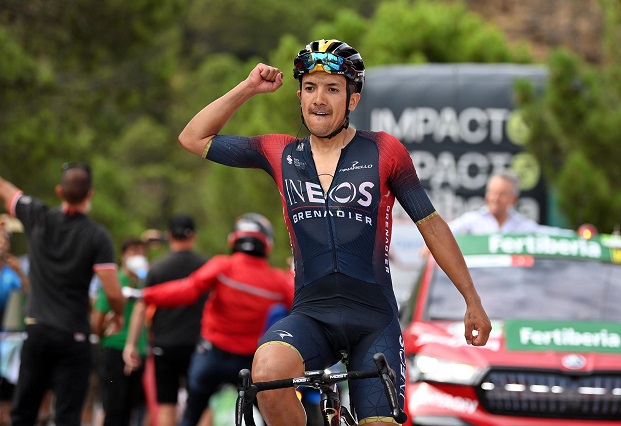 Richard Carapaz won stage 12 of the Vuelta a Espana on Thursday after attacking from a small group of riders on a long-range escape.

“I am so happy,” Carapaz said. “We came with a goal, and I wasn’t able to do it in the overall classification so today I was looking to win the stage. I am really happy that I was able to do it. I was waiting for the right moment to go, Bora was doing a lot of pulling on the front. I was just waiting for the last moment and with just over one kilometer to the finish it was really hard. I knew that I had to stay consistent. I’m really happy and it is nice to have good sensations again.”

Wilco Kelderman (Bora-Hansgrohe) tried to bring back Carapaz but had to settle for second at 9 seconds, while Marc Soler (UAE Team Emirates) rode through for third at 24 seconds.

Race leader Remco Evenepoel was forced wide by a motorbike at a corner 45km from home, causing him to suffer a painful fall.

“I’m okay, it’s nothing serious, I’ve been through far worse before,” said Evenepoel.

The Belgian picked himself up and eventually led a group containing the top five in the overall standings to the summit finish near the Costa del Sol. That maintained his 2min 41sec advantage over defending champion Primoz Roglic.

Three Spaniards round out the top five, with Enric Mas at 3min 03sec, Carlos Rodriguez at 4min 06sec and Juan Ayuso at 4min 53sec.

The stage covered 192.7km from the coast near Almunecar, where Rodriguez grew up.

Jay Vine leads the mountain points standings and wore a polka dot shirt and socks on Thursday and even had a polka dot trim on his shorts and helmet.

Mads Pedersen leads the sprint points race and will have a chance to rack up points on Friday during a flat run from Ronda to Montilla.