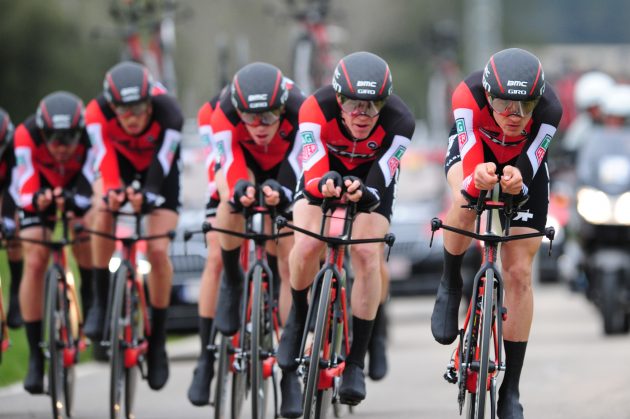 BMC continued their dominance in the team time trial at the Volta a la Comunitat Valenciana by smashing the 23km course to claim the win for the second consecutive year.

Heavy rain and strong winds early in the day put the race in doubt but eventually the race organizers and UCI commissaires decided to proceed but neutralize the result from the General Classification.

Fortunately, the rain had cleared and the roads had mostly dried by the time the first team rolled out.

As the fourth to last team to roll down the ramp, BMC was chasing the fastest provisional time of 29’01” set by Gazprom-RusVelo, which was later bettered by AG2R La Mondiale.

With the time taken from the fourth rider to finish, Greg Van Avermaet led Brent Bookwalter, Stefan Küng, and Jürgen Roelandts across the line and stopped the clock at 27’25” which was an impressive 50.77km/hour average speed for BMC.

Astana and AG2R La Mondiale completed the podium, 1’08” and 1’12” behind respectively.