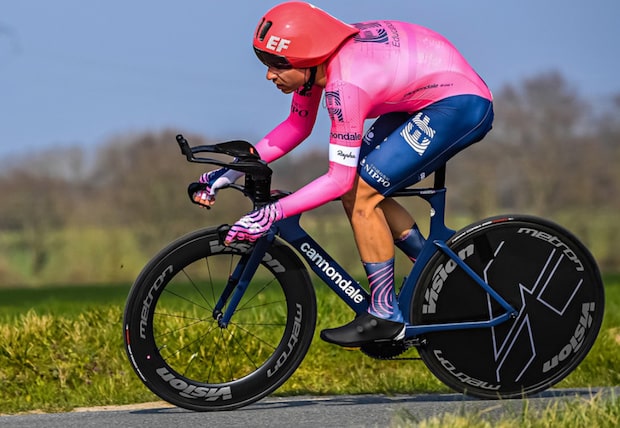 Stefan Bissegger (EF Education-Nippo) moved into the overall lead of the Paris-Nice after narrowly winning the time trial in stage three in Gien on Tuesday, his first victory as a professional cyclist.

The Swiss finished with a time of 17 minutes and 34 seconds on the 14.4km course, finishing less than a second faster than Remi Cavagna of Deceuninck-Quick-Step, while Jumbo-Visma’s Primoz Roglic finished third six seconds behind.

“It means a lot to me, I worked a long time for it,” Bissegger said. “I’m quite young, so I still have to establish myself to the others but I think I could show today that I’m here and they have to be aware of me.

“Time trials like that are really my thing. I come from track and the short punchy stuff is really good for me. It feels really great to finally show what I’m capable of and take the win here.”

Bissegger is competing in his first full season as a professional and the 22-year-old also claimed the white jersey as the best young rider.

Michael Matthews, who took the overall lead after stage two on Monday, was still leading at the intermediate time check but surrendered the yellow jersey after finishing 23 seconds behind at the finish.