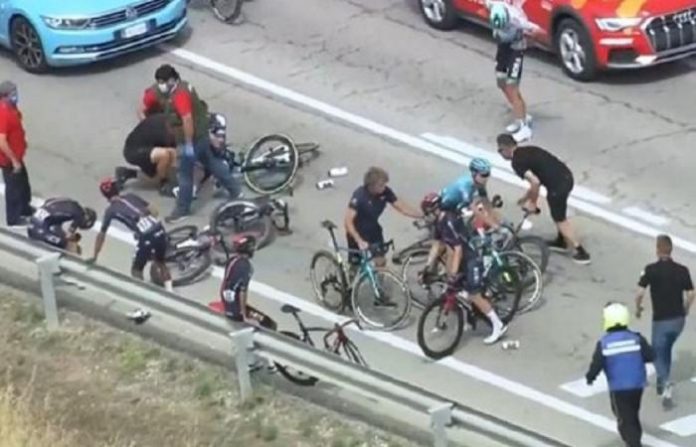 Egan Bernal, Daniel Martinez and Adam Yates hit the ground hard two weeks before the Vuelta a Espana. With 19km to go of the opening stage of the Vuelta a Burgos, the Ineos Grenadiers riders fell after a touch of wheels.

Bernal, Martinez and Yates are now out of the fight for the general classification of the Spanish stage race. The three climbers were able to finish the stage at their own pace. However, investigations showed that they suffered several contusions and abrasions.

“The three riders [Bernal, Yates and Martinez] had been part of the second group on the road when a large crash took down a number of riders with 19 kilometres to go. The trio were assessed at the roadside before continuing at their own pace to the finish, with Carlos Rodriguez also waiting at the scene for his teammates”, Ineos Grenadiers said in a statement.

“Bernal, Yates and Martinez suffered contusions and abrasions in the crash and after a post-stage assessment, will be monitored by the Ineos Grenadiers medical team ahead of Wednesday’s stage.”

The three climbers are riding the Vuelta a Burgos as final preparation for the Vuelta a Espana, where they are expected to share team leadership.

Yates will make his Grand Tour debut for Ineos in the Vuelta, while Martinez, Pavel Sivakov as well as Richard Carapaz, and Tom Pidcock are all currently down to ride.