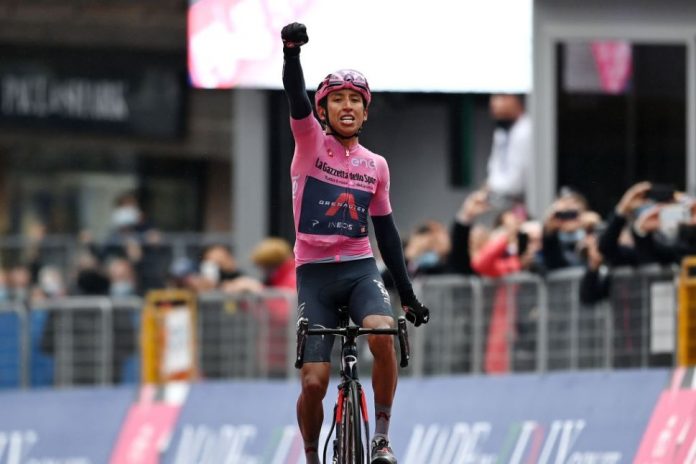 Egan Bernal won stage 16 of the Giro d’Italia on Monday to strengthen his grip on the overall leader’s jersey, as bad weather conditions forced the race from Sacile to Cortina d’Ampezzo to be shortened from 212km to 155km.

Cold and wet conditions led to the decision to shorten the stage as two climbs – Fedaia and Pordoi passes – were cut from the race. But the Ineos Grenadiers rider battled against the elements to finish 27 seconds ahead of Romain Bardet and Damiano Caruso.

“It’s a big victory. If you win with the maglia rosa it’s special so I wanted to show it and respect the jersey,” Bernal said.

“I wanted to do something special. I wanted to show I am back in the game. The team believed in me during the stage, and I just tried to go and to do something special. It was hard, of course. But when the race is hard because of the weather you need to be hard in the mentality also. I had the mentality in the beginning, and I kept it. It was a day to suffer, and we did it.”

The 24-year-old Colombian attacked twice and broke clear 4km from the final summit, arriving at the top with a 45sec advantage on Caruso with and 1min 13 sec over Bardet.

Bardet powered back on the descent to catch Caruso, but could not reach the Colombian, who took off his rain jacket to show his pink jersey as he triumphantly crossed the finish line.

Simon Yates dropped from second overall after losing over two-and-a-half minutes on the day.