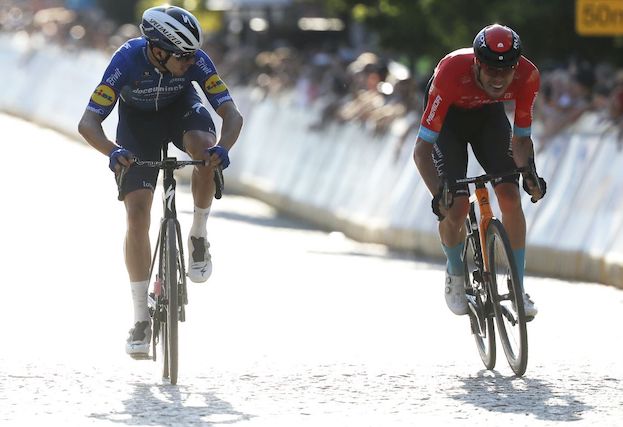 Phil Bauhaus claimed the victory on the opening stage of the 2021 Tour de Pologne, covering a flat route from Lublin to Chełm.

You can rewatch STAGE 1 of 2021 Tour de Pologne HERE

On the cobbled uphill terrain to the finish, Bauhaus overtook Alvaro Hodeg of Deceuninck-Quick-Step in the final meters. Hugo Hofstetter (Israel Start-Up Nation) was third.

“I was super confident with our sprinting group to do a super good result today”, said Bauhaus. “We’ve had an amazing season so far and we prepared really good for this race. The race was pretty controlled, with three guys in the beginning. It was a long stage, but we took control of it with Kevin. Then 15km to go it started to be a little nervous, but we were together as a team, and the guys did amazing in the final circuit. I did a massive pull to get to the front where Haussler was. I was a bit nervous as I was on Gaviria’s wheel and he left a gap to the Quickstep guys 300m to go, so I had to chase it, and it was a bit uphill. I saved a bit of energy for the last 150 meters, had another kick. I was focused to catch Hodeg from Quickstep, and I made it.”

After taking time bonuses into account, Bauhaus holds a four-second lead over Hodeg and young Yevgeniy Fedorov of Astana-Premier Tech, while Hofstetter and Michal Kwiatkowski are six and seven seconds adrift respectively.

Pascal Ackermann abandoned the race with his team confirming he was unwell last week and had not fully recovered.

A hilly second stage from Zamość to Przemyśl is set to take place tomorrow, covering 200.8 kilometres.