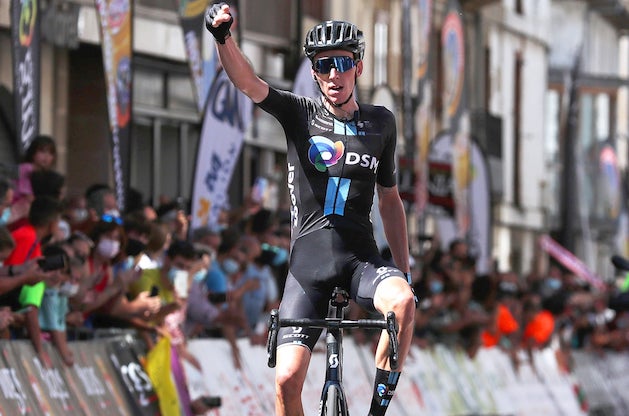 Romain Bardet took a solo victory on stage 3 of the 2021 Vuelta a Burgos and assumed the lead in the general classification.

You can rewatch STAGE 3 of 2021 Vuelta a Burgos HERE

The DSM rider attacked on the final climb of Picon Blanco and managed to pull away from his rivals on the descent to the finish in Espinoso de los Monteros.

Even a crash with around 5km remaining couldn’t stop Bardet as he quickly got back on his bike and won by 39 seconds from Domenico Pozzovivo (Qhubeka-NextHash), Mikel Landa (Bahrain Victorious) and Mikel Nieve (Team BikeExchange).

“It was maybe the hardest climb of the week and the team wanted to try something so the guys put in good position at the bottom of climb,” said Bardet.

“We came here for a result, and the goal was to win a stage. I felt I could jump and go alone near the top because I knew I was good in downhill. It was a stupid crash because I went too fast in the corner, but I managed to get back up and win the stage.”