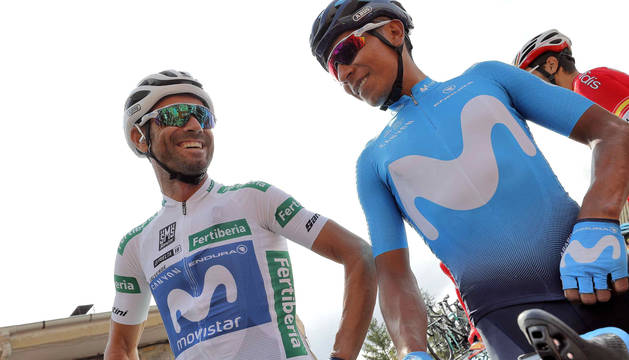 Alejandro Valverde has brushed off any suggestions of fights for the leadership of the team by claiming that all the team just wants the final victory of the Vuelta a Espana.

“You’ve all have already seen how close we’re to each other in terms of strength. At some stages one builds a little gap, then loses it in others… It’s really tight between the main contenders”, said Valverde.

“I feel like tomorrow’s time trial could be one that makes bigger gaps than all those that we had in the last couple of mountain stages. We’ll have a clearer GC situation from tomorrow on – not a strictly defined scenario, since there will still be three tough mountain stages remaining agfter Tuesday, but we should find the biggest gaps between the race contenders so far in this race tomorrow.”

“What we want is winning the Vuelta a España for Movistar. There has been a lot of fuss around in the press about who the team leader is, or whether there’s a fight between the two of us. The real thing is that it’s been a phenomenal Vuelta for us up to this point, and that we really get on well with each other and the rest of the group. We’ve got clear in mind that there’s a strong contender ahead of us, which is Yates, who will be hard to beat, and also that wanting to win the Vuelta and achieving it are two very different things. However, we Nairo and myself still both stand a strong chance to win this race. I’m 26” behind, Nairo is 33” behind. We’ve left some strong contenders behind, like Kelderman, Buchmann, De la Cruz… They had big aspirations and now they’re trailing well behind. We can’t really complain about where we’re sitting at this point. We understand each other really well, and it was my task to close the gaps yesterday while Nairo did in other stages. We did the best we could at every single stage.”

“The Tour de France? It could take its toll or rather be an advantage. Right now, we don’t feel extra tired because of July. I think we should be able to stay in this form until Sunday.”

“In my case, there would be no problems if Nairo needs me to work for him, even if I’m further ahead after the time trial. It could be the case that I lose some time in the mountains after doing well in the TT. We can’t sacrifice a chance just because one of us is 30” ahead. You’ve got to play your cards well.”

“I know the time trial only on paper. It’s a rest day today, and having the route close to where we’re staying, we’ll spend the morning trying to get a closer feeling of where we’ll race. As Eusebio has said to me, it’s a time trial which doesn’t suit me bad, but it won’t be really worse for our rivals than for me. And I’m not Miguel Indurain, either, if you think I can build a big gap there. We’ll see what we can do after we inspect the route, and we’ll also try and get a feeling of our legs after the important efforts in the last 4-5 days.”