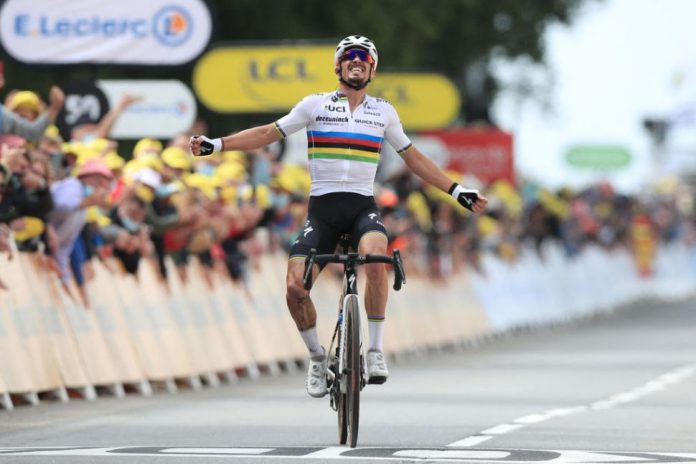 Julian Alaphilippe recovered from a crash to win the first stage of the Tour de France, an incident-strewn 197.8km ride from Brest, to take the inaugural leader’s yellow jersey on Saturday.

You can rewatch STAGE 1 of 2021 Tour de France HERE

The world champion burst away from the main pack with 2.3km left of a brutal climb up to the Cote de la Fosse aux Loups, and none of his rivals could match his power.

Michael Matthews took second place, with Primoz Roglic coming home third, eight seconds behind, with most of the top favourites including defending champion Tadej Pogacar and 2018 winner Geraint Thomas on their wheels.

“I really wanted to win this stage, my team believed in me and protected me all day long, I had to finish it off in the last ascent,” said Alaphilippe, his knee bloodied from an earlier crash.

“I attacked far from the line to test my rivals but when I saw there was a gap I thought I should continue.”

Mathieu van der Poel, who was out to take the storied ‘Maillot Jaune’ on his debut – a feat never achieved by his French grandfather Raymond Poulidor in 14 participations despite eight podium finishes – had too much of an effort to make at the foot of the last climb after being held up, and the Dutchman had to settle for 20th in the end.

The stage was hit by two massive crashes that brought down numerous riders. Among them were four-time champion Chris Froome, who looked in pain as he climbed on his bike again after being sent down in the second crash 7.5km from the finish.

The Briton, who has little hope of winning the race after failing to rediscover top form following a horror crash two years ago, ended the stage almost 15 minutes off the pace.

In the first crash, German Tony Martin was sent tumbling when he rode straight into a cardboard sign being held out by a fan looking the other way at a television camera, creating chaos with 47km left of the stage.

Overall contenders Miguel Angel Lopez and Emanuel Buchmann, among the riders held up, crossed the line one minute 49 seconds behind Alaphilippe, who bagged a career sixth Tour stage win despite also being involved in the pile-up.