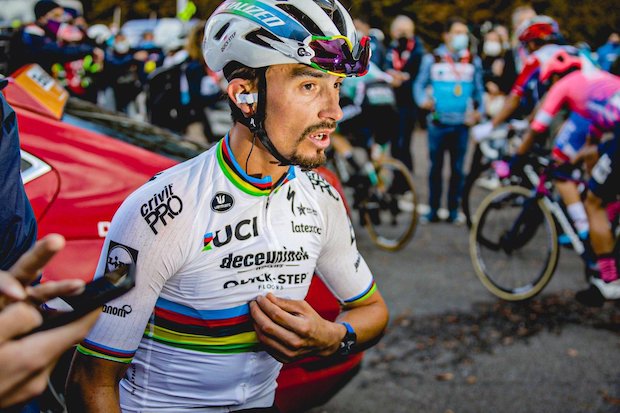 Alaphilippe and Bennett lead Deceuninck at Milano-Sanremo: Milano-Sanremo schedules its 112th episode this Saturday, one that will have a slightly altered route, with Colle di Giovo set to replace Passo del Turchino, blocked by a landslide.

The rest of the route will remain unchanged, which means the peloton will then take on the Capo Mele, Capo Cervo and Capo Berta – these three small climbs serving as an appetizer before the Cipressa and Poggio, where the attacks are expected to come in waves. From the top of the Poggio, only six kilometers remain until the finish on the iconic Via Roma, where the winner will be crowned.

Julian Alaphilippe has a special relationship with the Italian monument. It was here, in 2017, that he took his first Monument podium after the small group he was part of managed to hold off the charging peloton. Two years later, it was another first for the Frenchman on the Via Roma, as he outsprinted a select field for an unforgettable maiden Monument victory.

“I love Milano-Sanremo, it’s such a great race and I’m happy to be heading there again. Doing it in the rainbow jersey this year makes it even more special and exciting. My season so far was good, the condition has been improving since my first race of the year and also the confidence is there. We have a strong and very motivated team and we hope to be there when it will matter”, said Alaphilippe ahead of his 14th Monument start.

The World Champion will make on Saturday his fifth consecutive appearance at the longest one-day race of the calendar, where he will be joined by another rider who tasted success since the start of the year, Sam Bennett. The man from Carrick-on-Suir has four victories to his name in the last month, all in World Tour races, and will be looking to be in the mix in case the race comes down to a bunch sprint.

Kasper Asgreen, Davide Ballerini, Tim Declercq, Yves Lampaert and Zdenek Stybar will also be on Deceuninck – Quick-Step’s team for the first Monument of the year.

“In the past couple of years, we have always featured in the finale at Sanremo. We won’t hide the fact that we would like to do it again this Saturday, but at the same time we know that we are not the favourites for this edition. On the other hand, the riders are really keen on doing their best in this first Monument of the season and we’ll just see what happens”, explained sports director Davide Bramati. 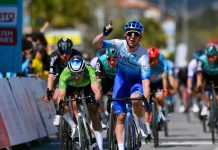 Groves blasts to stage two win at the Tour of Turkey