We have our answer about Hayter’s health…. he sets the clock back to Swiss time. After Wednesday’s  disappointment, he gives the answer by wining the sprint front of Aberasturi and Gaviria, with an impressive Vlasov for 4th. Probably Vlasov will also be there for stage 3 finish with Hayter expecting  a third stage win, as a mere consolation to his teammates, and most of all, his team management.  What a pity Hayter missed stage 1 or he would be the race leader.

Difficult to predict if a sprinter can survive the 165 km of climbing and descending all the day. The weather is again expected to be cooperative unless the rain shows up a day earlier than expected in Valbroye.

Lulu: If Bouchard stays in the game, he will try to go in the breakaway and win the stage.

CC 2004: After surprising everyone in Stage 1 Tour of the Alps Geoffrey he will sweep the KOM points and potentially another stage win (from breakaway) unless someone like Michael Woods springs form the peloton.

Mufcfaan:  This is a stage that could rewards the escapees. Although it is difficult to predict the strongest men of the break, Bouchard and Vanhoucke will be among those eyeing for victory. In case, the main group manage to come back, Hirschi would want to take a victory here. Hermans and Bevin could also win the sprint. 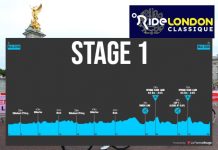