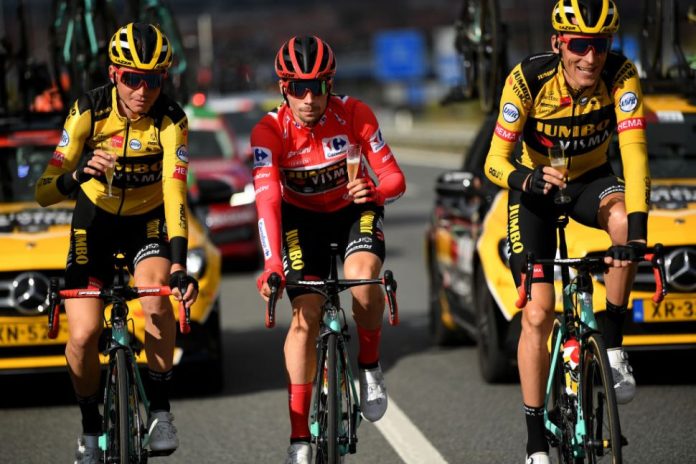 Vuelta a Espana organisers have unveiled a route based entirely within Spanish territory for this year’s Grand Tour, which will conclude with a time trial in Santiago de Compostela.

Organisers Unipublic announced in November that Burgos Cathedral would host the opening stage of the race on August 14, with 2021 marking the building’s 800th anniversary.

The two following stages will be held within the Province of Burgos, finishing in the districts of La Gamonal and Picón Blanco respectively. The latter will feature the first high-altitude stage finish of this year’s race.

Sprinters will have four opportunities to secure stage victories during the opening week of the race, with the route taking riders through Soria, Guadalajara, Cuenca, Albacete, Valencia and Alicante.

An ascent of Alto del Faro de Cullera on stage six and a mountainous route in Alicante the following day will pose early obstacles for the general classification contenders.

Nine stages will be held before the first rest day on August 23. Following the first rest day, the race will resume at Roquetas de Mar with the Alto de Velefique among the highest category climbs featured on this year’s route.

The provinces of Málaga, Jaén and Córdoba will be visited during the race as riders face a series of challenging ascents in the Andalusia region.

The final week features the famed Lagos de Covadonga climb on stage 16, before riders face a new mountain pass of the Altu d’El Gamoniteiru the following day. Organisers claim the mountain pass will go down in history.

Racing will continue with a stage finishing in Monforte de Lemos, before the penultimate day is held solely within the Province of Pontevedra.

Organisers have broken with the recent tradition of holding the final stage in Madrid.

A Coruña has been selected to host the final stage, which organisers claim takes into account the Jacobean year and 2021 edition of the race being dubbed “La Vuelta de las Catedrales.”

The final stage will feature a long time trial in Santiago de Compostela, with the day’s racing beginning in Padrón.

A similar stage was held at the Vuelta in 1993, which was the deciding factor behind Tony Rominger’s victory.

“The world is going through a very tough time right now, and this is being particularly felt in our country,” said Javier Guillén, La Vuelta general director. “For this reason, we wished to design a different kind of race.

“It is an ambitious Vuelta, that will cover many kilometres, but will stay only within Spain.

“We want to showcase our country – its beauty and its potential as a tourism world leader.

“We will be present in many territories, with a huge variety of terrains and unprecedented locations, while also visiting some of the country’s largest tourist centres.

“This is our way of entertaining people and of promoting tourism as we await a gradual return to normality.”

The 2021 Vuelta reverts to being 21 stages long, with organisers forced to shorten the race to 18 in 2020 due to the coronavirus pandemic.

This year’s race is due to move back to the typical August to September time slot in the calendar, with it currently scheduled for August 14 to September 5.