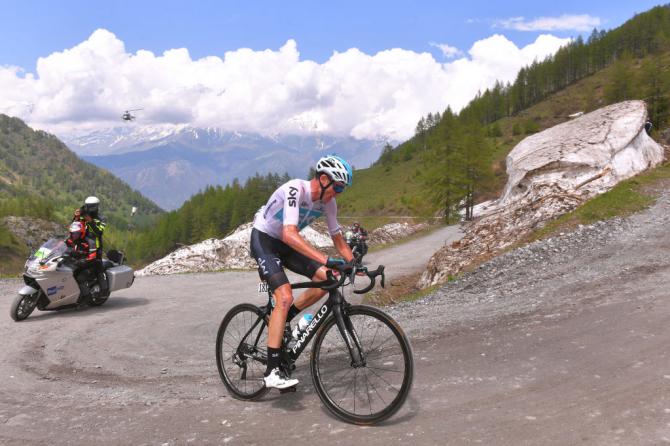 Chris Froome produced an astonishing lone attack to roar into the overall lead at the Giro d’Italia on Friday, winning stage 19 with a performance that will go down in cycling folklore.

The Team Sky rider started the 185-kilometre ride from Venaria Reale to Bardonecchia in fourth place in the general classification, but launched a devastating attack with 80km to go up the Colle delle Finestre to storm to a famous victory.

Simon Yates (Mitchelton-Scott), who started the day three minutes 22 seconds ahead of Froome, ended the stage with his Giro hopes in tatters after blowing up.

Tom Dumoulin, the defending champion who had begun the day in second place, nearly three minutes ahead of Froome, was left trying to minimize the damage to the Briton on the final climb.

He finished fifth on the stage, three minutes and 22 seconds behind Froome who also took time bonuses.

Four-times Tour de France winner Froome is now perfectly poised to win the one Grand Tour missing from his collection headed into the final two days of racing.

“Colle delle Finestre was the perfect place to do it. Gravel roads remind me of Africa,” added Froome.